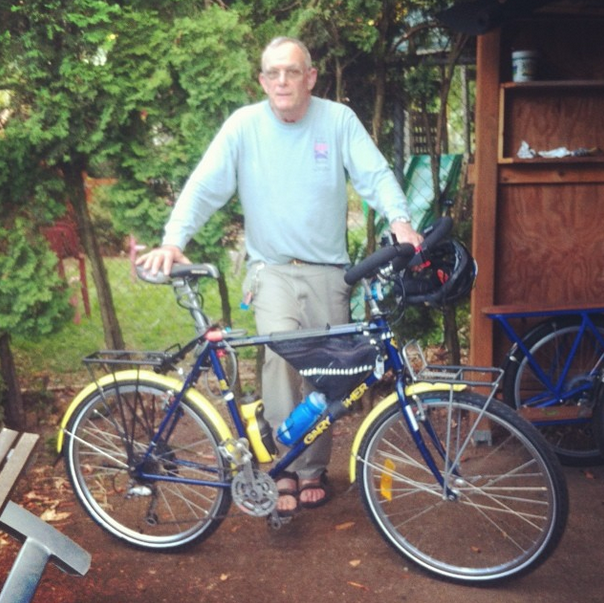 Win put this Gary Fisher together. Its an American Gary Fisher frame. I think Win said it's an 90's frame.

Win built the wheels. His first wheel building project turned out well. He said factory wheels so often don't hold up under heavy loads, so he wanted to remove all doubt and build 'em himself.

The handlebars give lots of positions that help you avoid that numbness from keeping your hands in one place for a long time. He has a compass, which he says is incredibly useful, especially in medieval towns where it's easy to get disoriented. He's also got a nice trip computer.

Win says he got a good deal on the fenders and they stay in place well.

His panniers are Ortlieb brand. Win described how they sometimes don't seat well on the racks. So, he got some rubber automotive fuel line and split it so that it would sit over the racks and provide a less slippery place to hang the panniers. The racks themselves are very sturdy. Maybe Win will comment on this blog post and tell us what brand they are and where he got them, because they're very strong.

Win used to use clip on pedals but says the simple flat ones are fine for him these days.

He says two water bottles are enough. His seat is an ergonomic foam model.

Win carries these extra supplies: a couple of tubes and simple tools, extra cables and brake pads, a good pump, and his lock is a Masterlock with a Kryptonyte cable. He carries a couple of stoves. One is a Bluet. The Bluet takes those blue canisters. He has the other one in case he can't find Bluet gas canisters.

Win is headed up the Oregon coast today, leaving from Portland and will stay in campsites along the way to Vancouver, BC. Sounds like a great trip! Have fun and ride safe, Win. Thanks for telling us about your bike.