There I was, all geared up for a conference in Boulder and I found myself looking at Couchsurfing. No sooner did I post, Wyndham Pounds contacted me with a place on the east side of town. We met, my concerns about distance from city center were allayed by Boulder's wonderful recreation trail system, one in particular which ran along the river straight from his place to town. 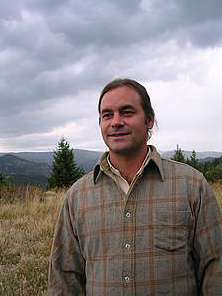 I dropped by and Wyndham explained that he was an itinerant massage therapist, movie/documentary maker and thrill seeker. He'd just been in the far east, traveling around on this Kona. The frame had broken and Kona shipped him a new one. Kona had been very accommodating. If I remember correctly, the issue was minor, but Kona shipped him a new frame in no time at all and he wound up having a great time.

Here's an example of Wyndham's work. He shot this in Cruising around Wat Tat Luang in Vientiane, Laos from a bike (I believe) using some sort of mount for his video camera. I'd seen lots of Konas here and there. Abbie's Kona, the one above, was a commuter in Portland I saw on the MAX train. Portland, OR is all set up for public transit. This Hei Hei Kona was lounging around in the snow in Crested Butte, CO.

So, back to Wyndham's Kona. Set up for touring, it's light weight, not over the top in terms of price, has disc brakes and is, in my opinion, a very good looking bike. Wyndham said he loved it. What else can I say? Do you have a favorite touring bike? My favorites include: My Dawes Galaxy. I got it in college and it was over 10 years old then! It's the one bike I've clung to all these years. Many have come and gone, but the Galaxy is my go to bike. Recently, a friend rebuilt it. Dave likes restoring musical instruments. He says cleaning and polishing old saxophones and trumpets, etc is relaxing. So, when he saw my Dawes, he offered to disassemble it and shine it up for me. Nice! This is the bike that was the basis for my friendship with Niles, the owner of Recycled Cycles. It had a problem with the derailleurs. I'd already replaced the front one and Dave enlisted Musa of 8th Ave Bike's and Coffee's help to get the rear one and some other bits and bobs taken care of. It's a beauty. It's the bike I brought with me as *the* example of my comfortable bike I'd like to model a custom Villin after when I visited Lex of Villin Cycle Works. I love the Dawes. Gainesville is full of beautiful places to ride. When I want to go out exploring, the Dawes is my first choice. Dawes is Raleigh's chief competitor in the UK and Ireland. The Galaxy is a bell weather model. Here's a modern Super Galaxy I saw not far from my house when I lived in Sandymount, Dublin. I was good one year and asked Santa for a new bike. I hadn't had a new bike for over 20 years. As usual, I shopped and shopped. I wanted a Dawes and I leaned toward getting a new Galaxy. This was '98 and new Galaxy's were going for about 500 Punts. A Punt was about $1.40. My only hesitation was that, even though my Galaxy was already over 30 years old in '98, it was still a fine rider. I'd seen bike commuters and messengers drafting behind Dublin city buses on urban assault weapons, as Jeremy Millner refers to them, and wouldn't you know it, I found new one in a bike shop on sale for 480 Punts. So, I got me an Edge. Still have it. I ride the Galaxy far more, though. Another bike worth mentioning (understatement) is the Bridgestone XO-1. The short story is Grant Peterson, former Bridgestone product manager, decided to be iconoclastic and assemble bikes that were more functional and reflected components that worked well, rather than being just good deals or popular brands. He produced the XO-1 in '92-'93 plus or minus, and only made about 1000 bikes per year. I was visiting my podnuh Michael in Berkeley and found this XO-1 on craigslist. Took the train, met Kevin and had a great time while his roommates were heating up the atmosphere talking politics in the boarding house where he lived. One ride and I was hooked. This link has the whole story. The XO-1 is such a cult figure, there's a Facebook page and sites all about them. Like I said, they only made 1000 per year for a couple of years. I took it to Niles looking for tires. Niles showed me some fatties. He said "These are great. They are soft and cushy, cost about $15 and I've had no complaints." I got a pair and bingo. Nothing like a new set of tires on a bike. You don't need no stinkin' $80 tires on your bike.

Another thing Grant Peterson made popular was moustache handlebars. I took the XO up to 8ABC and had Musa work his magic. I tried 'em and no way. They kill my back.

So the final setup is drop bars with bar end shifters. Love it. Musa did a brilliant job setting it up. Here's a set of photos showing it in many different incarnations.