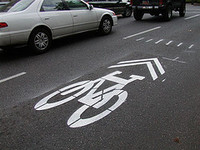 Winter Park to get bike 'sharrows,' racks
posted by Kate Santich on May 7, 2008 8:03:18 PM
Discuss This: Comments (6) | TrackBack (0) | Linking Blogs | Add to del.icio.us | Digg it
More good news for local cyclists... The city of Winter Park plans to add some conspicuous markings to roads designated as bicycle routes -- including Palmer Avenue. The markings are called "sharrows" (a combo of "share" and "arrows") and look like this:

The city says the goal is to "help bicyclists position themselves in lanes too narrow for a motor vehicle and a bicycle to safely travel side-by-side" and "encourage safe passing of bicyclists by motorists" -- including giving them that 3-foot clearance.

And Palmer isn't the only roadway getting a sharrow. Others designated bicycle routes will, too.

Meanwhile, the Winter Park Health Foundation is paying for 46 new bicycle racks around the city as part of its "Healthy Communities" program. The racks will be scattered throughout the city to encourage bicycle commuting both for exercise and a greener way of transportation.