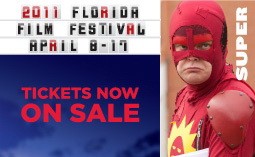 Let me begin by saying that the Florida Film Festival begins in a matter of hours, and you could say it starts tomorrow, but it's even more fun to say...hours away! Why should you, my Zoobird friends, be interested? Well, there is a distinct eco component to the festival. Not only that, but it's a fantastic way to spend some time in The Enzian and supporting venues and see a bunch of better-than-usual films in a short span of time. Near enough to fresh air to actually smell it, at least walking into the theater.

There will be so much to see, so much to report, that to encapsulate it a new Zoobird group is in order. And, it will be called the Movie Zoo. So, stop right there, cowpokes and surf on over to the Florida Film Festival website. Take a look at what's a happenin' and make some plans. Thanks to your loyalty here at Zoobird, yours truly will be there to represent y'all and report back all the news that's dangerously organic enough to print. Stay tuned!