Spook Handy pays tribute to the songs of Peter, Paul and Mary 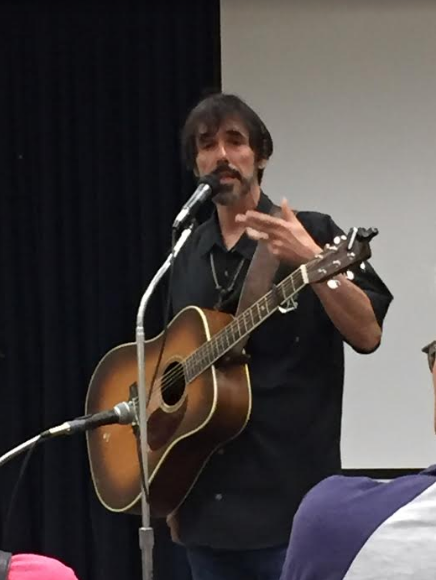 Spook Handy brought his guitar, trusty banjo and a bunch of harmonicas to the Winter Park Public Library this afternoon and played some favorites in tribute to Peter, Paul and Mary to a lucky crowd. In days gone by, Spook performed several times with the band's founding member Peter Yarrow. In between songs, we heard stories about history and activism, particularly a moving reminder of the courage of Rosa Parks.

Pete Seeger and Woody Guthrie are big influences. Billy Bragg is an influence, too. Hearing that, I got to tell Spook my story about how I met John Stirrat while Wilco and Billy Bragg were recording long lost Woody Guthrie poetry set to music in Dublin. 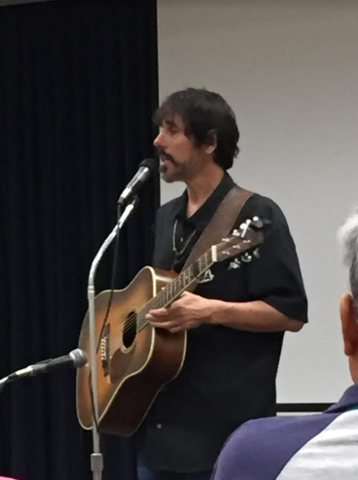 Spook played Michael Row Your Boat Ashore, Puff the Magic Dragon, If I Had a Hammer, Where Have All the Flowers Gone and many other folk favorites. He got us to sing along!

You could tell that years of practice and performing were behind the deft Travis Picking and strumming. Spook has a gentle voice. He explained how the folk songs had an appeal to both young and old.

Spook mentioned that he was from New Jersey and had driven all the way down to Winter Park, FL! This was a free performance, funded by contributions from ... who knows where. Somewhere. I'm sure buying some of his music will give you listening pleasure and the money will go a long way.

You can hear previews of the songs on the page. There's a John Prine song in there: "Your Flag Decal Won't Get You Into Heaven Any More" There's also some background on the songs near the bottom of the page.

Thank you, thank you...thanks a lot, Spook! It was fun hearing you play and singing along!