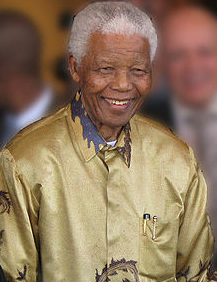 In thinking about Nelson Mandela passing from his body, the thought came to me how he will never be too far from the hearts and minds of many millions. His energy of love and peace for all has become instilled into our beings. It will live in many of us through our lives.
That he walked out of prison after 27 years and then became the president of South Africa is an extraordinary, unprecedented example of human will.
Mandela went into prison as an determined, even angry and violent, anti-apartheid leader. He came out though, as a man of peace and reconciliation who guided his country to that end.
How this can happen to a human being is not explainable by ordinary words? It seems as if something in his being was propelled ahead by a destiny beyond knowing.
Many of us struggle with wanting to manifest our own will for the highest of goods. Those exact same ideals manifested by “Mandiba,” Mandela’s clan name, are in many millions as we pray for peace in the world. May we all keep his spirit alive within us as we do our work toward that end.

Published in the Daytona Beach News-Journal