Wow! It worked! I was a little concerned when I saw the Kombucha after about 2 weeks because there was an irregular film on top. The photo below, from the Wikipedia Kombucha article leads me to believe the film on my Kombucha is normal. I'm pretty sure the first batch of Zoobird Kombucha is OK.

The photo above is how my Kombucha looked after two weeks of fermentation. 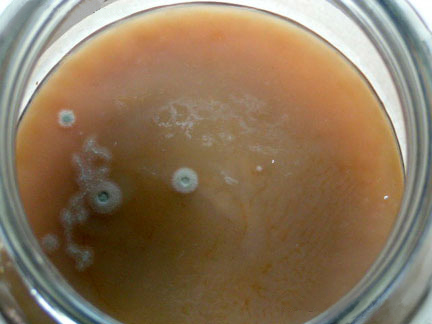 The photo above is from Wikipedia, and shows how moldy Kombucha looks.


I got the 4 wine bottles WJ gave me and the three commercial Kombucha bottles I'd emptied and David showed me how to make a good funnel out of a paper plate. We poured the Kombucha into the bottles and had still enough left to fill a half gallon milk jug up.

I added a little sugar to each bottle. Then, I corked them and put them in the closet.

I got some Turkish black tea called Kaycur and got the next batch of Kombucha going. I put the original SCOBY and the new baby SCOBY in the new batch. So, now I have one batch to enjoy and one batch fermenting, just like Saroj describes she's done for a long time.

Another good combination might be black tea and peach juice. I found a website, GetKombucha dot com (http://getkombucha.com) It gave me some ideas, like adding raisins, ginger root and lemon juice. All in all, this is so satisfying, since it worked the first try.