It's a sunny day here in the Swamp (as I affectionately call Florida, where I live now). Here I am, minding my own business and just piddling around. I really should be outside, riding a cool, red bike I just got. Click the photo below to go to the Bike Zoo and read along with me as I digress about that two wheeled thing called a Ciöcc I really dig. 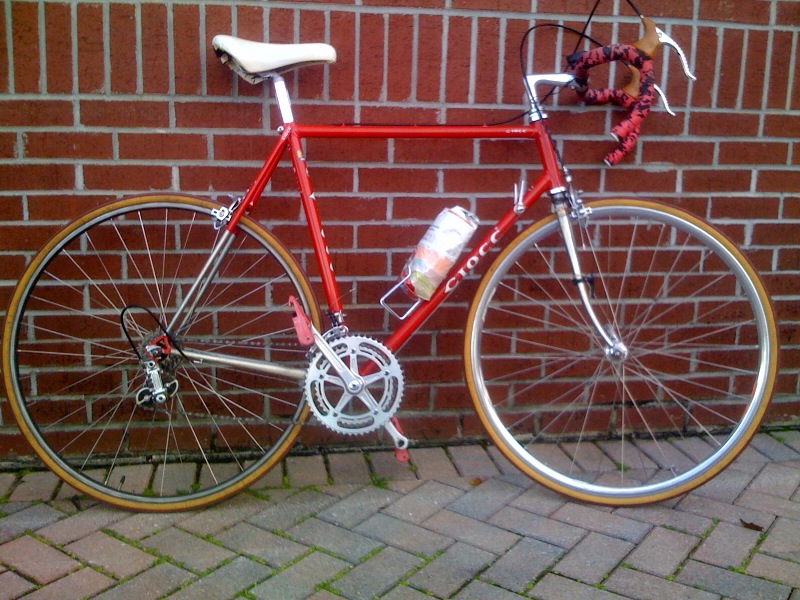 Yes, it's what I expected it to be. Fast, light, and as sexy as anything Italians design. And, I should be on it. 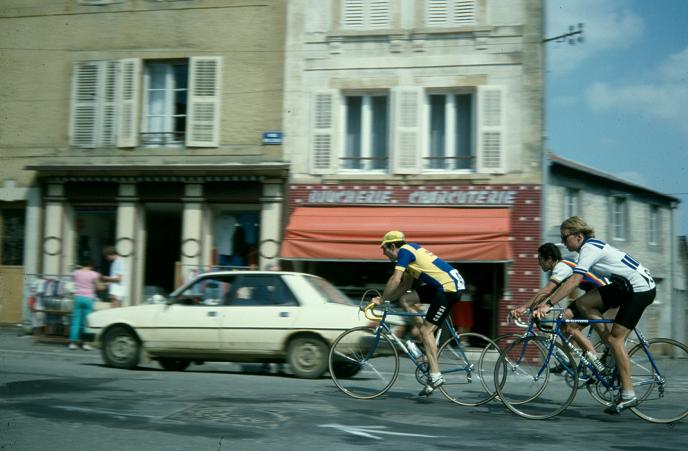 Bill totally talked me into getting it. That's Bill in the photo above, going reprehensibly fast along some innocent street somewhere in Belgium. Correct me if I'm wrong about it being Belgium, Bill.

But, I'm listening to Oregon Public Music on the computer, piping Tom Waits "Hold On" (out of his album "Mule Variations, which I like very much already, based on that single) into a 40 year old NuTone intercom system in my house. If you click that link, you'll surf to GrooveShark, the hippest software development shop I've ever had the privilege to set foot in, just down the road a piece in Gainesville, FL. It's so good, it was hard to take my attention off it even for just a few seconds to do a quick search to find the YouTube video of Jack Johnson's "Banana Pancakes" you are listening to right now as you read this. You are, aren't you? I hope so, because it's very good.

And, soon, I'll be able to play it. That's because there's a guy named Teague who has a talent for teaching and he's got a video (also on YouTube) that I am studying, and soon I'll be jammin' in a similar fashion on my guitar. It's a sweet song, not too hard to play, achievable. And, it's gonna be fun to sing, too! There you go. That's yours truly and said guitar. Howdy.

So, what inspires all this digression? A buddy of mine who is on Facebook is reading "The Omnivore's Dilemma",

by Michael Pollan. I just checked it out of our local library recently and browsed it. It's pretty dense and I didn't read the whole thing, but I was taken by a review by Kathy Gray I read that I'll share with you here: 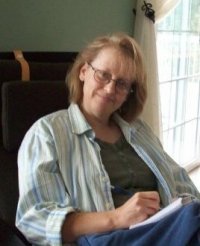 "I learned a lot from this book, but what stuck with me the most was this: We grow lots and lots of corn in order to feed the cows which are supposed to eat grass, and treat their resulting corn-induced disease with antibiotics. We don't feed them the grass their supposed to eat because we've used up all the pasture land to grow the corn which feeds them (and us) more cheaply. We use chemical fertilizers to grow the corn because the cow manure which should be fertilizing it is across the country in Kansas piling up in the over-crowded cow pens we put them in so that we could grow corn in all the pastures. How's that for a plan? And after wading around in their own feces, the beef must be irradiated to kill the bacteria caused by the manure that should have been fertilizing the corn, which shouldn't really have been grown in the first place. But not to worry, as a result we get plenty of cheap, diseased, irradiated beef to enjoy, and even more cheap, chemical-laden, corn-filled, processed food to make our life easy. Wow, life is good, isn't it? It reminds me of the little old woman that swallowed a fly...
I guess we'll all die." Meanwhile, I am thinking about all this and I walk into the kitchen, jammin' to Tom Waits on OPB. I pull out some groceries I got the other day from Whole Foods and the local grocery store, Publix (love that name). In September, my buds Michael and Bob Hauser and I cruised out of Berkeley CA to NV for Burning Man. That's Michael on the bike in the photo above.

Once everything was set up, Mike and I feasted on corn tortillas, lentils and artichoke hearts. They were so good. Food, shelter and clothing, as they say, are the foundation that eventually frees us up for personal gratification. So, the other day, I got some of the same stuff and did some reminiscing. BM tix just went on sale, BTW!

So, this is what you do. Get some corn tortillas. Find some artichoke hearts. I got the 365 brand canned ones, in water. But, the Spanish ones in oil are superb. Then, do your lentil thing, whatever that may be. For us, out at BM, it was packaged lentils from Costco. They are very good, if a little bland. Pull out a tortilla, slap some lentils on it and roll the whole thing up with an artichoke in the middle. Wash it down with some Charles Shaw...Two Buck Chuck, or like I did a few minutes ago, with some fresh grapefruit juice. I'm in the Swamp, after all.

Next one was made with some canned green chilis. That's the nearest I could come to New Mexico Hatch chilis, which totally bring me back to the Crested Butte Int'l Hostel, where I last had some. What an amazing time. While I was there, Juan made some chicken Mexican style with green chilis that was so unbelievably good, I can still remember exactly what it tasted like. I traded him (and the rest of the hostel that snowy Sunday morning last March) some of the buffalo breakfast burritos I made for a bit of that green chili chicken.

Well, green chili isn't the absolute closest I can come to the CB Hostel fare, I got some poblano chilis from Whole Foods. The girl who checked me out said "What are you going to do with those?" We talked a little and I told her how poblanos aren't too hot, just right. They use them for chili rellenos sometimes. I like them raw, in lots of things. Like corn tortillas, with lentils and artichoke hearts.

Comment by Michael Levin on December 21, 2009 at 12:58pm
Thanks, Sh'mal - that means a lot to me coming from you. I'm looking forward to reading the "piece from the bog" on Zoobird...we all are.

Comment by Sh'mal Ellenberg on December 20, 2009 at 5:20pm
Mike oh Mike, it reads like you are getting into a new groove with your writing. Really, either coming alive anew, or been holding back or working on doing more or giving it a whole new try with stringing words together in making sense and letting the subtle mind relax and let fingers do the work. Good for you. It takes courage and guts to let the inner parts of us do the expressive, creative thing, sometimes surprising us with what's come forth. That piece from the bog was like that. I spent 30 more minutes in a Starbuck with a note book and pen scribbling like a man possessed trying to get the words down. I may add it too what I sent you. I'm about finished with the part of the piece about the death of my client. I have 60 pages of notes from the caregiving year with him, so I made have other parts. Good work my friend, Sh'mal