Trung is the owner. I remember the first time I visited. I checked in and got into a kayak right away. I started paddling out toward the sea and in came Trung. She'd just finished her paddle. We exchanged intros and decided that the next step was to hop on a bike and head out to the community garden to pick some veggies for dinner. Trung is here on Zoobird, by the way.

Another time, Isaac Pierce and I caught the $17 bus from Hawthorne Hostel in Portland to Seaside. Isaac had his jumbo Guild with him and we sat in the living room for hours playing guitar and piano. Isaac is here on Zoobird, too!

I recorded lots of it. Here's a recording of one song Isaac played.

There's a leg of the Muir Trail right down the street from the Seaside Hostel. One thing that persuaded me to stay there the first time was a sign on the counter that said "Meditation Seaside for anyone interested in the morning at 9". It was super cool and after that we did some Chi Gong. One of the people there had just graduated from Warren Wilson and asked me if I wanted to coordinate cars so we could hike that day down the Muir Trail and have a car on the end to drive back. We did and she pointed out berries and all sorts of edible plants. What an adventure!

Another time, Trung introduced us to the Audubon club in town. We stayed for a lecture and a potluck dinner.

We rode down the street and bought some razor clams one night and all cooked delicious dinner in the community kitchen. I could go on and on. The reason for all this reminiscing is that I just surfed to http://www.SeasideHostel.net and saw that Trung has totally updated the site. There's a video there with photos of some of the best parts of the area. I just can't wait to go. For now, I'll just dream a little...

Panther, I just called to see how the repair is coming (sic) along on my Westie. Thumbs up! Now, whether it's a good idea to drive an estimated 1 day 22 hours from Gainesville to Portland...that remains to be considered. This is the time to be in the NW! I didn't know you were up there. Nick Brogan (is on Zoobird) lives in Portland and just raved to me about Tonasket, WA. He also just trekked thru a beautiful part of the Olympic Peninsula. All these great places to go! I can't wait to go out that a way. And, it's going to be soon. That's a promise. Did you happen to listen to the recording attached to the other version of this blog post I put in the Travelin' Zoobirds group? I couldn't attach it - oh, wait - I can link to it. Here it is: Isaac Pierce (also here on Zoobird) playing his gorgeous jumbo Guil.... Enjoy!

This is my Westy I am just dying to drive out to Oregon...sitting pleasantly at Mycol Stevens Finca. 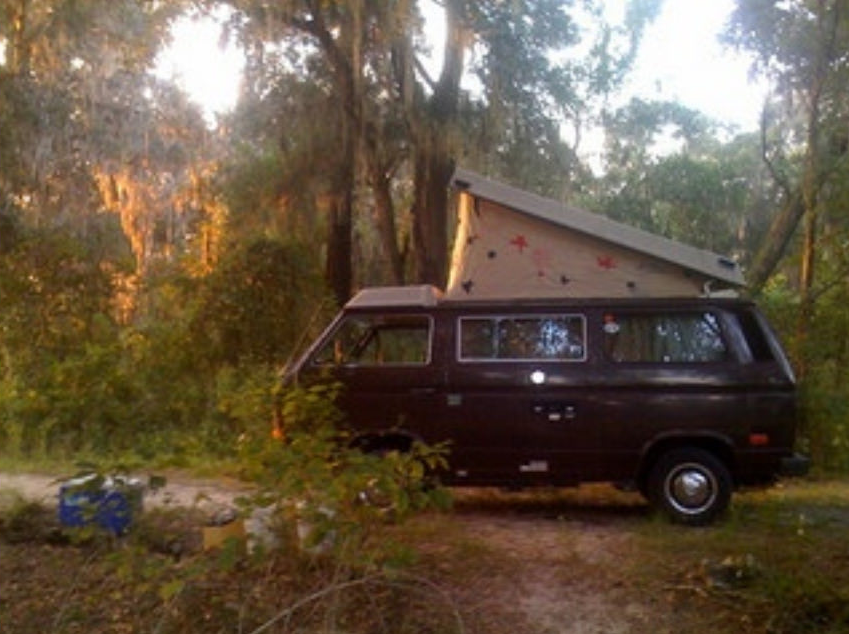