Hiking on Paynes Prairie yesterday, we watched a large flock of turkeys strutting among the dog fennel and salt bush plants. But we were also a bit horrified. Here it is only a few days before Thanksgiving and they're wandering around without a care in the world. After centuries of being the main attraction on the traditional Thanksgiving table, you’d think they would have developed some instinctive aversion to all things human at this hungry season. They should feel uneasy and have an irresistible urge to duck behind a bush and gobble in hushed tones. Better yet, maybe they should evolve an instinct to migrate to more turkey-friendly environs (of course this would require them to also develop the ability to fly more than a couple of hundred yards without getting winded).

The sad reality is that animal behaviors rarely evolve fast enough to keep up with the changes inflicted on them by modern technology. The most glaring examples of this shortcoming are seen on roadways where wild animals face the modern world's most dangerous foe. How many times have you watched an indecisive squirrel darting back and forth in front of an oncoming car, often with tragic consequences? It’s a great move when avoiding a hawk, but relatively useless against a pickup truck.

I wonder if some of these animals have just enough intelligence to recognize the folly of their often-fatal instincts, but not enough will-power to overcome them. For instance, when a skunk does a handstand with his back arched so far back that his musk propulsion unit (his butt) is over his head and aimed forward prepared to spray, does he ever wonder if this is really the best way to handle an oncoming pick-up truck? Is there a moment, as a car is bearing down on an armadillo that she thinks, “maybe if I resist the temptation to jump straight into the air as the car passes over me, I might survive this troubling turn of events.”

The clash between modern technology and animal instinct takes place off the highways, as well. One example is light pollution. Moths that fly at night have a fatal attraction to artificial lights. In a natural setting they navigate by stars or moonlight by keeping those celestial landmarks at a fixed angle as they fly. Stars and the moon are so far away that the angle doesn’t change as the animal flies. This keeps it on a straight course. But, when there’s a bright artificial light, the moth wants to use it for navigation instead of the stars. When it keeps the porch light at a fixed angle to its side, it just flies in circles and bumps helplessly into the light.

Similar navigation concerns have prompted ocean-front communities to ban outdoor lighting during turtle nesting season. Hatchling turtles are drawn to the brightest horizon, which in natural conditions is the open ocean with reflected light of moon and stars. Artificial lights from condos or homes lure them in the wrong direction, away from the water.

Not all of these outdated instincts have such dire consequences. When your dog rolls in an animal carcass in a loving attempt to bring you information about a food source, surely he’s learned that not only will you be unimpressed, but he will be temporarily banished from the house and all human contact. Worse, it will likely result in the dog-world's version of capital punishment—a bath.

So, to all you turkeys reading this notice (my e-mail list is wonderfully diverse these days), I have some advice—evolve! Maybe you could learn a few tricks from your fellow creatures. For instance, you could follow the lead of skunks and become nocturnal. Just don’t follow their lead onto the roads. Or perhaps you could learn celestial navigation from moths. The warblers and swallow-tailed kites tell me South America is great this time of year.

You can often see horses from the Alachua Lake Overlook, if you have binoculars.

looks good! I'll check it out. I was at Paynes Prairie the other day and saw a wild horse. The water management in the area is under scrutiny - evidently, it's being drained and everything's suffering. Sh'mal and I walked around and enjoyed the sights. Speaking of Turkeys, there's a new book out I really want to read; the title is "Girl Hunter: Revolutionizing the way we eat, one hunt at a time" by Georgia Pelligrini.  She's a New York Chef who decides to start harvesting the meat for her meals, starting with a turkey.  For those of us who didn't grow up in a hunting culture, it might be instructive.

Great Turkey post, Michael!!!  I would just comment, that while the turkeys have not evolved enough to use a calendar and avoid humans near Thanksgiving, they DO know that when hunting season starts, you head for Paynes Prairie Reserve, where nobody's allowed to shoot at you.  A day or two after deer season starts, the deer have all left the Lake Lochloosa Wildlife Management area, where they are hunted, and headed to Paynes Prairie.  I'm sure enough of them stay in the hunting area to keep the hunters coming back, but that's the nature of natural selection.  Eventually, either the deer or the turkeys will develop calendars, and I'm sure they'll share.

Comment by Jennifer on November 28, 2009 at 11:02am
The massive roadway system we have created is pretty much a conveyor belt of death for traveling wildlife. What is so upsetting to me is how sometimes we encourage the animals there, like how the Dept. of Transportation in West Virginia has started the Operation Wildflower; they have been planting wildflowers alongside the roadways and highways in an effort to "beautify" the roadscape. What happens to birds and bees who come to drink the nectar of these roadside plants?... they are hit by cars! The mice who come the eat berries and seeds and the bird who swoops down to eat the mice?... they get hit by cars! What is also so un-natural about this situation is that most of the time the unfortunate fellow does not even have the dignity of decomposing back into the earth or becoming someone else' dinner. The roadkill most often seen is left to rot on the pavement, or continue to be flattened by passing cars. This makes the vulture's and buzzard's job a hazardous one indeed. I have made it a point to carry a small shovel in my trunk so when I see a victim of our vehicles I can put him/her back onto the earth.

Comment by Michael Levin on November 25, 2009 at 6:00pm
I love it! Lars, you will enjoy meeting Mycol Stevens, if you don't already know him. Mycol explained to me that he won't buy meat from stores because he objects to monoculture ag techniques, like planting bahia grass for grazing, which inhibits growth of other plants. But, he's no vegetarian! I shared a road kill stew he made us one evening at Finca Mycol. It was delicious. He'd harvested the venison very shortly after the deer was struck by a car. He then made it into jerky. I wrote it up on Elephant Journal in an article called "Living Off the Grid".

Now, I hope you won't find this photo offensive, but it's real life. That's Mycol prepping the road kill deer in the photo below. 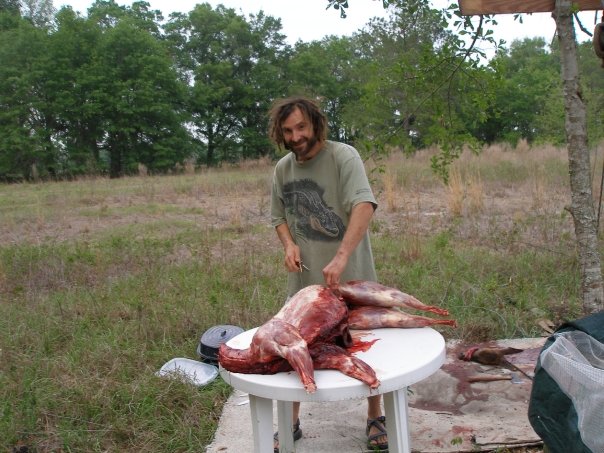 And, that's Mycol with the jerky and some dried mushrooms in the photo below.