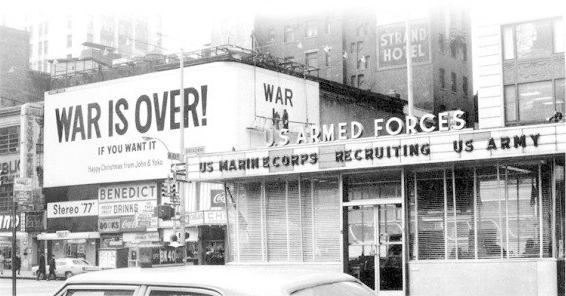 Thanks, Shmal - The Nation: "“WAR IS OVER! IF YOU WANT IT” – a full page ad in the Sunday New York Times Dec. 27 must have puzzled many readers. The ad marked an anniversary: it was 40 years ago today that John Lennon and Yoko Ono launched their “War Is Over!” campaign, with billboards in New York, London, Hollywood, Toronto, Paris, Rome, Berlin, Athens and Tokyo proclaiming the message in giant black letters on a white field – and in much smaller type at the bottom, “Happy Christmas from John & Yoko.” The message was repeated on posters, leaflets, and newspaper ads."


And Yoko also posted a 1969 “WAR IS OVER!” video at YouTube ­ and online, downloadable do-it-yourself posters in 60 languages.

Start yours tomorrow, and you will see that it spreads and covers the world very fast and, meanwhile, makes you a Small Pebble Person.

Small Pebble People are people who know that small pebbles, when they’re dropped in the ocean, will immediately affect the ocean of the whole wide world.

Just drop a small pebble.
We’ll keep doing it. Together.
That’s how the world gets changed…by Small Pebble People.
We change, and the world changes.

I love you!
yoko 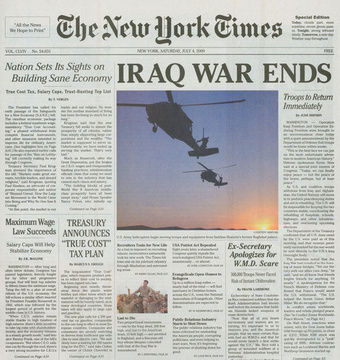 Gawker: "The Iraq War is over, according to the fake New York Times! This morning a cadre of volunteers has fanned out across New York City to pass out a remarkably good, faux-copy of the Times dated July 4, 2009. They've even set up an entire website with all of the liberal fantasy headlines. Universities to be free! Bike paths to be expanded! Thomas Friedman to resign, praise the Unitarian Jesus! It's not funny like The Onion, but obviously a lot of work went into this. Now we play "Who did it?..." Click here to find out...