Somehow a top official from CropLife -- the powerful chemical industry
trade group that went after Michelle Obama's organic garden -- has been
nominated to serve as America's chief agricultural negotiator for
international trade. If confirmed by the Senate, Isi Siddiqui, who has
spent the last several years of his career fighting various restrictions
and bans on environmentally hazardous pesticides, would bring that
inappropriately aggressive stance on broadening pesticide use to the White
House and influence trade negotiations with Europe and the developing
world.

I just signed a petition to ask President Obama to drop the nomination of
Isi Siddiqui as chief agricultural negotiator in the Office of the United
States Trade Representative. I hope you will, too. Please have a look and
take action. 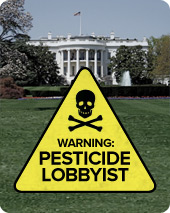 The link Sh'mal is talking about is here.